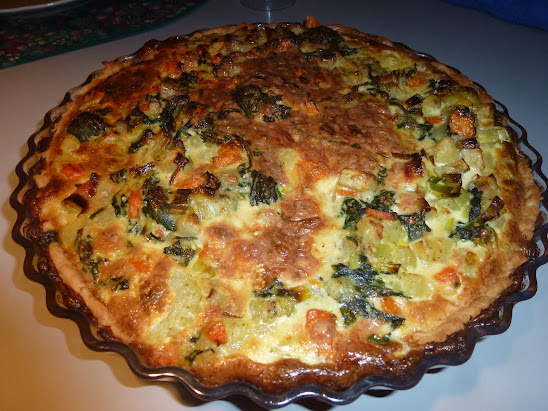 This is a fantastic pie with lots of vegetables spiced up with delicious blue cheese.

2 eggs, 2 dl. crème fraiche, 200 gr. blue cheese such as Danish blue, Bleu d’Auvergne, Stilton or the like. It should be fairly strong.

To make the crust you put the flour, butter and cheese (cut into chunks) into your food processor and let the machine run until you have an even crumble. Now add the cold water (not too much at a time) and see how the dough forms into a lump. As soon as a large lump has formed, stop the machine, take the dough out and knead it slightly. It should be fairly dry, so that it is easy to roll out. Now roll out to fit your pie mold. Grease the mold with butter and drape the dough in the mold and cover the sides well. The dough should “spill over” the top edge a few millimeters – this ensures that it doesn´t shrink during prebaking.
Now prebake the crust for 15 min. in a 170 degrees Celsius hot air circulation oven.

Make the filling while the crust bakes. Chop the onion, cut the leek and celery into slices and cut the carrots and potato into dices. Fry in plenty of olive oil for 10 min. until almost tender. Add the spinach, put a lid on the pan and wait until the spinach collapses. Add salt (1 -2 tea spoons) and pepper and stir everything well. In a bowl beat the eggs, add the crème fraiche and the blue cheese that has been cut into fine chunks. Stir well. Add the vegetable mixture to the prebaked crust and pour the egg mixture over. Bake for 30 min. in the oven at the same temperature as above. Enjoy with a green salad.

Share one of your fabulous recipes with the rest of the world.

Know about urban farming? New cooking techniques? Other exciting news? Please share with the rest of us!

Did you know that pabular is a fun and interactive food community where everyone can participate? You can cast votes, comment, earn badges and push yourself to the top of the leaderboard.
Joining is completely free and only takes a few seconds.

I get it, but no thanks